These Conferences will take place in Guimarães, a city in the north of Portugal, in the Minho region, approximately 350Km north of the capital, Lisbon, and about 50Km from the second largest city, Porto.

The city of Guimarães has its origin in times previous to the foundation of the Portuguese nationality and represents more than just the simple birth of a city. Guimarães precedes and prepares the birth of Portugal in the 12th century, and represents the cradle where was born its prince and its kingdom. 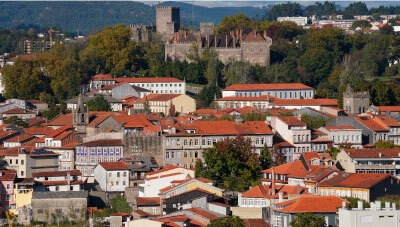 The city of Guimarães is like no other city in Portugal. Its past is so intimately intertwined with the History of Portugal that it is proudly referred to as the Cradle of the Nation.

The Historic Center, exemplarily rehabilitated, was distinguished and classified by UNESCO as a World Heritage Site in 2001, raising its recognition and prestige on a global scale.

Culture and cultural events are a key part of the visit to Guimarães, as was recognized in 2012 with the holding of the event “European Capital of Culture”, which catapulted the city to the main European cultural tourist destination, boosting creativity and promoting the arts and local artistic creativity.

The industrial sector has a very strong weight on the local economy, with internationally renowned brands that, along with the University of Minho and the Science and Technology Park – Ave Park, play a fundamental role in a vanguard context as poles. knowledge, science, and technology at the highest level.

Environmental concerns have been, for some years now, a strong commitment by the municipality, through the implementation of new sustainable urban mobility infrastructures and the promotion of awareness and the importance of natural resources.

Safe and peaceful place, with activities and nature walks, cultural events and traditional festivities throughout the year, good gastronomy and wines, Guimarães has a lot to offer and surprise the visitor.